Extracts of the Presentation to the International Society for Geographic and Epidemiologic Ophthalmology by David Dunaway and Ian Berger (InFOCUS Center for Primary Eye Care Development).


[…] Estimates of the number of people worldwide with refractive error range from about 800 million to 2.3 billion. No prevalence data are available from the World Health Organization or from any other source relating to very large populations such as groups of nations, or whole countries. […]

[…] As for the proportion of an entire population with refractive error, Daniel Etyale of the W.H.O. reported at a special session on refractive error at an International Agency for Prevention of Blindness meeting in 2001, that 5 -15 percent of children are considered to have refractive errors, the majority of which are uncorrected, and that there is currently a need for population based studies to ascertain these figures. […]

[…] Although sufficient data have not been collected to accurately predict prevalence per diopter of correction for most populations, general prevalence information on the three types of refractive errors and of presbyopia can provide an orientation of what to expect.
- Hyperopia, for example, is usually present at birth, except in premature infants. Hyperopia decreases in magnitude through age 4 years, and the prevalence of hyperopia less than +1.25 D (an amount usually difficult to compensate accomodatively) is 4-7 percent between ages 5-20 years, remains constant through early middle age, then increases in populations aged 45 or more. […] Hyperopia also occurs in patients with poorly controlled diabetes and in patients who've had cataract surgery.
- Myopia prevalence varies with age, race and sex, increasing at least through adolescence, and is present in 1 per cent of children at age 5 years, increasing to 8 per cent at age 10 years and about 15 per cent at 15 years. Myopia occurs slightly more frequently in females than in males.
- The prevalence of astigmatism may be as high as 70 per cent, if all amounts are included, but is considered to decrease to 3 percent if the extent is limited to 1.25 diopters or more. […] If astigmatism is greater than 1 diopter, it usually develops before age 2 years.
- Not a refractive error, presbyopia is due to a loss of accommodative ability. It usually starts between ages 38-45 years and the prevalence is 100 percent by age 55. Early onset is associated with hyperopia. […] 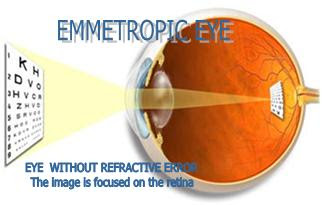 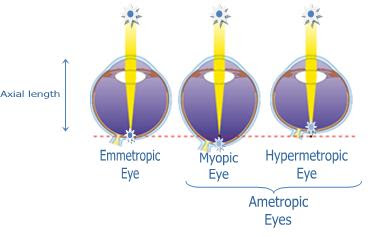 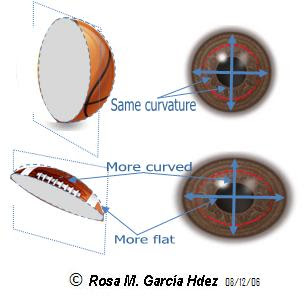