The Mystery of 3D - Why somepeople see it and others not. 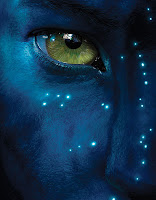 “Avatar”, as other recent movies, has led the wish to watch movies in a diferent format we are used to or we watch everyday on our televisions.

I suggest to you read this article. Surely you will solve many questions about why some people watch 3D movies without any problem and others feel uncomfortable or can not watch them.

This visual problem can be solve easily with vision therapy in many cases (except in strabismus, amblyopia, monovision or monocular vision).

Don't be startled if 'Avatar' makes you nauseated

To my dear readers... 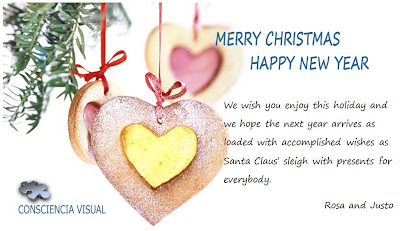 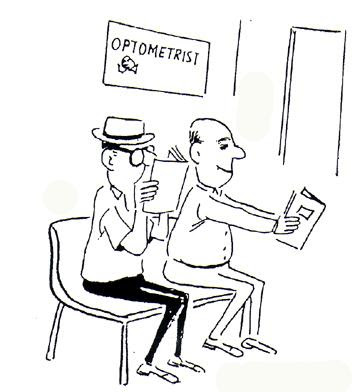 As I explain in a previous post, presbyopia is a visual disorder that is product of the time as it goes by.
When we look something at near something in order to focus and to see clear, a phenomenon is caused in our eyes called ACCOMMODATION, and the lens has to change its shape so that the image of what we see, is focused on the retina. But over the years, on one hand, the ciliary muscle, as the rest of body muscles, gets more rigid and shorter; and on the other hand, the lens increases the thickness of its faces, thus losing its elasticity (this therory is the most approved one). So, the muscle loses the ability to contract itself to allow that the lens to be more convex (at the same time, the crystalline lens does not do it because of its stiffness), and the accommodation does not happen.

This loss of accommodation process is gradual. It begins affecting the vision in the closest distance, and the changes of focus in different near distances are slower and with worse quality (those changes of focus are what we call “accommodative flexibility”). Little by little the ability to focus on near distances and increasingly farther from oneself its more difficult; this happens when our arms begin to stretch and in a certain moment they seem short. When it happens, this indicates that our focus is failing and we need a lens that compensates the accommodative effort that we can not perform anymore.

This process begins between the 40’s and 50’s (depending on the refractive error that we already have at a young age; at the beginning the presbyopia starts adding a little positive lens for near distance -1.00 diopter approximately - over the graduation that we need to see far away); it usually stops around 58 years old (with a addition of around 2.25 or 2.50 diopters).

Presbyopia equally affects everyone, but hyperopic people start to suffer it at an earlier age than the emmetropic one; and these ones earlier than myopic people. Some of these myopic people (low and medium), when the presbyopia appears in their lifes, they are capable to read without using their eyeglasses, because of the compensation that is caused between both phenomenons.
From the moment presbyopia appears, this increases during a period of 10 or 12 years and then it is strabilized. Some of you, seeing how fast presbyopia increases when it begins, might think that it will never stop, but I assure you that it does.

In the case of some emmetropic or low hyperopic people, they suffer an increase of hyperopia after using reading eyeglasses of +1.00 dipoter during some time, when presbyopia is evident; so that after a couple of years, that graduation is not enough for the close up tasks, but they are only useful for distance vision. This is called HYPEROPIA OF PRESBYOPIA.

According to American Optometric Association 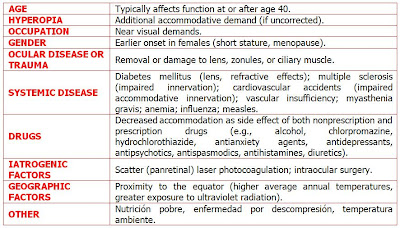 Presbyopia is what everybody knows as “old sight”. It is not considered as refractive disorder or an ocular illness.

The typical complaint in presbyopia is “BLURRED VISION AT CLOSE DISTANCE”. A presbyopic person stretches her arms in order to see better, but in a certain moment “THEY ARE TOO SHORT”.

Distance vision may have not any changes, at least in the first stages. 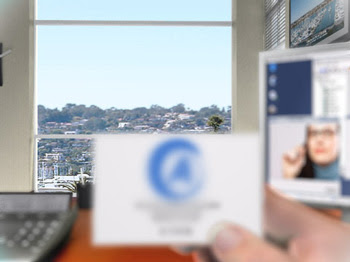 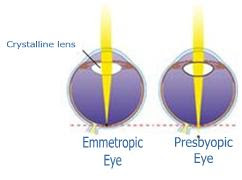 The shape of the eye is like a myopic or hyperopic or even emmetropic one at young age; but the difference is given by the crystalline lens. When a person looks at objects up close, she is not capable of focusing them on the retina, but behind (as hyperopic people), therefore seeing them blurred.

Everybody will have suffered presbyopia sooner or later, after 45 years old.

As presbyopia is age-related, its prevalence is higher in societies in which larger proportions of the population survive into old age.

For instance, from all Spanish population, 43% suffers “old sight”. And from this 43%, 7% of presbyopic people have never checked their vision in any previous occasion. Because of the increased life expectancy, within 10 years, more than half of the Spanish population will suffer from this condition.

It does not exist any way tested to be true in order to prevent it. 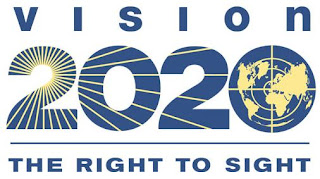 World Sight Day (WSD) is an international day of awareness, held annually on the second Thursday of October to focus attention on the global issue of avoidable blindness and visual impairment. This year, it focuses on gender and eye health–equal access to care.

VISION 2020 is the global initiative for the elimination of avoidable blindness, a joint programme of the World Health Organization (WHO) and the International Agency for the Prevention of Blindness (IAPB) with an international membership of NGOs, professional associations, eye care institutions and corporations.

Over the next two decades, Vision 2020 will take steps to prevent an estimated 100 million people from becoming blind.
Vision 2020 focuses on creating adequate eyecare facilities, a foundation of well-trained eyecare
workers, implementing programmes to control the major causes of blindness, and integrating
eye-care into general health care services... (more)