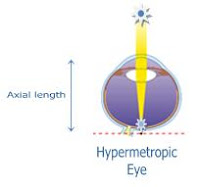 The farsighted eye, unlike the myopic eye, is smaller than usual, or its lenses have less power.
Consequently, the image is focused BEHIND the retina. 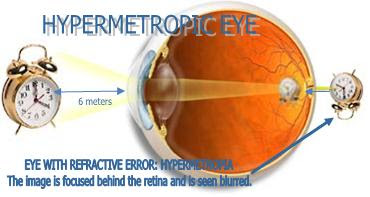 Some authors “…concluded that the growth of the eye during infancy is extremely rapid, and its adult size is reached by the age of 3 years…” and that “…the process of emmetropization is evident during the first year of life…”.

“…by the ages of 6 to 8 years old emmetropization has taken place, the great majority of the children being in the emmetropic group, which has its peaks at 1.00 diopter of hyperopia…”

There is a high percentage of children who were born hyperopic, because our eyes, when we were born, are not completely developed, and are small. As time goes by, if this hypermetropia is low, it disappears when the eye grows, so that sometimes, it can even turn it into myopia in school years.

Hyperopia, unlike myopia, do not usually vary until getting into adult years. At that moment, the appearance of presbyopia or “old sight” causes that the hyperopia increases much more, either hyperopia can appear or the myopia can even decrease.

Around 10% of people in Spain suffer from hypermetropia. 22.4% of population in USA and Australia is hyperopic. Specifically, there is a prevalence of 12.8% in American children aged 5-17 years.

In school years, hyperopia is usually lesser worrying than myopia because the clinically significant values of hypermetropia (and astigmatism) are 2-4% of the children who begin the school years, and also, these values do not increase over time.

If you remember, environmental factors are very important in myopia; however, although the majority of children are hypermetropic when they start the school years, the hyperopia does not usually increase, but it decreases if anything.
Therefore, its existence is usually thought to be caused by hereditary factors.

In the other hand, a visual disorder derived from hyperopia is the presbyopia or “old sight”, that is typical of old people. In this case, this disorder is product of the time as it goes by. The ciliary muscle, as the rest of body muscles, loses elasticity and strength, and as well the capacity of being contracted; this way, the lens can not be more convex, and that prevents the accommodation to happen. That is why hyperopic people begin to suffer presbyopia earlier than emmetropic people; and these ones, earlier than myopic people.

Carrying on with the “refractive disorders series”, and seeing that there have not been a lot of questions or comments regarding myopia, I will keep on writing about hypermetropia or the “refractive defect of children and old people”. 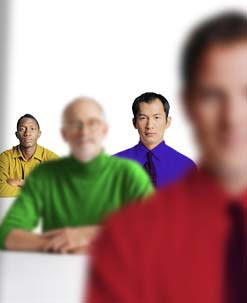 The typical complaint in hypermetropia is “INSTABILITY OF VISION WITH PROBLEMS AT CLOSE DISTANCE”.

Her distance vision is usually VERY GOOD; as many people say, a hypermetropic person has “EAGLE VISION”; but unlike myopic people, her visual system is an exhausted system, due to it is constantly trying to compensate her refractive error in order not to have any problems, both as from a distance and as close up.

Therefore, as the near effort is higher, the exhaustion will appear earlier at this distance; and therefore, blurred vision will appear first at near, and then, when the visual system is already very exhausted, she will also notice that she has poor distance vision.
But, what does this mean?
In order for you to understand it better, I need to briefly explain to you the concept of “accommodation”, which I have named it many times previously.

In the case of a person without refraction:

In the case of a hyperopic person:

Therefore, the ocular system can perform the effort required to carry on this retarded image to the retina, through a change of the power of its ocular surfaces. This is the reason why an hypermetropic person who sees wrong at distance (because her image is focused behind the retina), if she is a young hypermetropic person and/or her hyperopia is low, she has the capacity in order to focus the image on the retina and to see it clear, through her eye accommodation; this way, her visual system is constantly under “visual stress” situation in order to keep that image clear.
If also, we add the additional effort that hypermetropic person performs when she looks at their close-up tasks (since hers lens has to be more convex than the ones of an emmetropic person), in order to achieve that the image is maintained clear on the retina, in some cases it can be a really daily effort.

All of this causes some problems:

Well, this is only the beginning…