Why does a myopic person’s vision improve when she squeezes her eye lids to a narrow opening?

Enlace a entrada en español
Ref: BOOK: PRIMARY CARE OPTOMETRY
One feature of myopic people is that when they look far away and see blurred, tey unconsciously learn that their vision improve when squeezing their eyelids to a narrow opening. 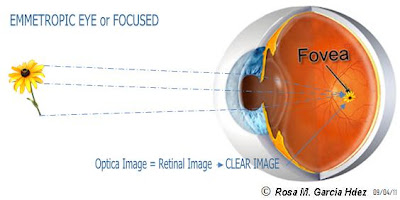 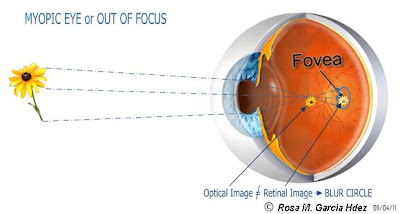 In order for you to understand better, I will explain the difference between “optical image” and “retinal image”. We should begin from two premises:

The size of this blur circle depends on two factors: the distance of the optical image from the retina and the pupil size. 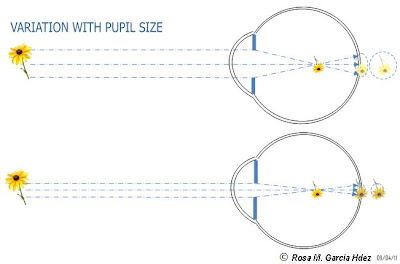 So, when a myopic person squeezes her eyelids, she just reduces the quantity of light rays that get into her eyes, and with this, she achieves decreasing the size of the circle on the retina, causing a more clear image.

It is proved that for the Visual Acuity to be good, the pupil size must range between 2 and 5 mm: when it is smaller than 2 mm, the diffraction effects of the light tend to reduce Visual Acuity; whereas if it is bigger than 5 mm, spherical aberration is the factor may reduce it.

Therefore, in order to know whether a child has myopia, a test can be performed: the child covers one eye whereas with the other eye, she looks some letters far away from her, through a cardboard with a small hole of around 1 mm (it is like a homemade “pinhole”). If the child has myopia she will see better when looking through the hole (it is just as if she squeeze her eye lids to a narrow opening); if the child is emmetrope (not refractive error), she will not see any difference.