Briefly I am going to explain to you how the eye is and everything surrounds it; really I would need several posts, but I think that the basic knowledge of this post and the two next ones, it will be sufficient to understand others.

A cross section of the eyeball: 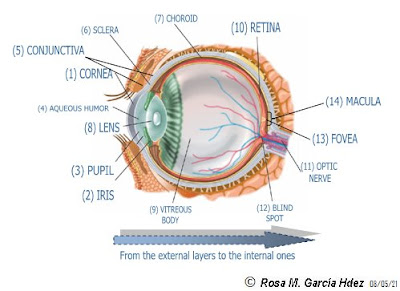 (1) CORNEA: It is the outer and front part of the eye and where the contact lenses rest on (not on the iris (2) -where some contact lenses wearers think-, as you can see in the graphic), because of its curved surface. In humans, this structure has a refractive power of approximately plus 43 diopters.
Its transparency is its main feature and it is crucial that this layer keeps this way, since it would be a sign of a pathological upset. This layer does not have any blood vessels but has many nervous endings, that is why it is so sensitive; this is the reason why it is necessary a contact lenses adaptation process. The corneal sensitivity in each people is different and that is why some people feel contact lenses as a little eyelash into the eye, and however, others feel it as a stone, which hampers us from opening the eye.

(4) AQUEOUS HUMOR: It is the transparent liquid that resides in the space between the cornea (1) and the iris (2). It is responsible for the value of the INTRAOCULAR PRESSURE (IOP), that is, the Eye Pressure, which, under abnormal values, can be one of element of risk to develop Glaucoma (although this one is not the only element that we have to considered in its diagnostic). The normal value range is around 21mmHg, but depends on many factors.
IOP varies during the day; when we wake up the value is higher, due to the pressure that our eyelids make over the cornea (1) during the sleep hours. The value normalizes during the day, until the night when the value increases again.
Therefore, a good control of IOP requires to assess it at around the same hour of the day and to use the same assessment instrument.

(5) CONJUNCTIVA: It is the outer part of the eye as well (it is a continuation of the cornea (1)). It is a viscous membrane that covers the outer part of the eyeball and the inner part of the eyelid in a continuous way; therefore, when one contact lens moves on the eye, it is impossible that it gets lost behind the eye (as many contact lenses wearers are afraid of).
It is a transparent layer, but it has blood vessels, besides nervous endings.
These blood vessels and this layer become inflamed when the eye becomes irritated (due to an eyelash or some dust that gets into the eye, or because of contact lenses, an allergy, an infection, and so on).

(6) SCLERA: It is a tough and white layer under the conjunctiva (5) (in the outer part of the eye) and it covers the almost all the eyeball from the cornea (1) until the Optic Nerve (11). When the eye becomes very irritated, you can see much better its inflamed blood vessels.

(7) CHOROID: It is the next opaque concentric layer under the sclera (6).

(8) LENS: It is the biconvex “lens” (you can see in the graphic how its outer and inner face are convex surfaces), flexible and transparent that we have inside the eye, directly behind the pupil. Owing to this flexibility the lens changes both surfaces curvatures constantly and thereby, the light, getting into the eye through the cornea (1), focuses on the retina (10); that is, this structure allows us to focus on objects in different distances due to these changes of curvature.
This is the part of the eye where the Cataract occurs, because the lens loses its transparency. In humans, this lens has a refractive power of approximately plus 18 diopters, which is why, when the damaged lens is removed, doctors put a new lens in the eye to replace it. Its refractive power can vary according to the patient refraction and his visual needs.

(9) VITREOUS HUMOR: It is a jelly-like and transparent liquid that fills a big part of the eye between the lens (8) and the retina (10). It allows to maintain the shape of the eye and absorbs any knock. This liquid is mainly made up of water. So, when it loses its transparency, it is necessary to extract it and to fill with salt solution; but this surgery involves many risks. This part is responsible for the “floaters” which are perceived in the visual field as spots or fibrous strands. We can see them mainly when we look at a plain background (as white walls, sky,…). Floaters are generally harmless, but the sudden onset of recurring floaters may signify a disease of the eye.

It is crucial that the four transparent surfaces of eye (cornea (1), aqueous humor (4), lens (8) and vitreous humor (9)), maintain the transparency, in order for the light not to find any obstacles in its way.

(10) RETINA: It is the last concentric layer under the choroid (7) and surrounding the vitreous humor (9). It is the most important and complex eye layer, because it is made up of six kinds of nervous cells and it is wherein the visual information that gets in the eye is received, and wherein the image is created and processed by the brain later on. Therefore, it is the first part of Visual Process.
But this layer deserves one blog post just for it.

(11) OPTIC NERVE: All axons of ganglionar cells at the retina (10) (the last layer of nervous cells of the retina) get out the eye setting up this nerve and taking all information received in the retina, through the visual path.

(12) BLIND SPOT: It is an area in the rear part of eyeball, and it is the orifice where the optic nerve (11) goes through the sclera (6), the choroid (7) and the retina (10). There is no vision in this orifice because there are not photoreceptor cells - the first cells with the responsibility of receiving the visual information that get into the eye-.
In order to see it, let us do a little demonstration: Close one eye (for example, the left one) and stare at one target. Then, put your forefinger over that target and move it slowly out (on the right in this case and on the left if you stare at with your left eye); keep on staring at that initial target and maintain the horizontal height. Doing this, one certain moment, the forefinger tip will disappear, and will come back if we keep on moving your finger out.
This little area without vision in the retina is named “blind spot” and it is what we named Physiological Scotoma in the space. But the brain manages to fill this spatial gap, basing on what we see in the surrounding areas.

(13) FOVEA: It is the point of highest vision of the retina (10), since it contains the largest concentration of cone cells in the eye and is responsible for Central Vision. In the example above, it is the point wherein we focus on what we want to stare, the target (with the exception of strabismic people or people with “lazy eye”).

(14) MACULA: It is a little area in the retina without blood vessels and that surrounds the fovea (13). We see the things that we want to see within this area and perceive all its details (e.g. reading); besides it is the area responsible for seeing the colours and the vision under well-light conditions as well.
The rest of the retina (peripheral retina) is responsible for the vision under low-light conditions or at night, and it is very helpful when we move in the space to avoid being hit with the surrounding objects that we do not see directly.


These are some of most important structures of eye, or at least the ones that you can hear more often, and some concepts that I am sure someone, some time, has told you or will tell you about them.
I hope that you have now a better idea what part of the eye they were or will be talking about.


In the next post, I will briefly write about all structures surrounding the ocular globe, which are also very important for a correct visual functioning.

Most spots and floaters in the eye are harmless and merely annoying. Many will fade over time and become less bothersome. People sometimes are interested in surgery to remove floaters, but doctors are willing to perform such surgery only in rare instances.